You Totally Got This

I did a little ink blending for this background panel, I added a layer of black cardstock in behind and left a large white frame on the card base.

I ink blended the background with distress inks, created some water spots in the blended ink then added further interest with splatters of white and black watercolour ink. I also did the same with some gold and silver.

The sentiment is white heat embosses on black cardstock and popped up with foam tape then a few sequins to finish. The card base looks cream in the photo unfortunately, it is white in actuality. 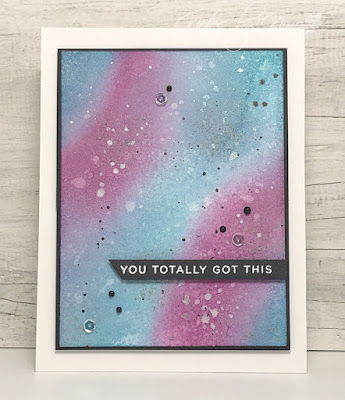 Thank you for stopping by,
Nina

Posted by Notes by Nina at 5:47 AM No comments:

I brought this cool pack of galaxy paper on a whim, when it arrived I really was not sure what I was going to make with it. It only sat on the edge of my desk before I had an idea.

In truth I let the paper do all the work, I think perhaps that is why I love patterned papers so much, they can make cardmaking so easy. 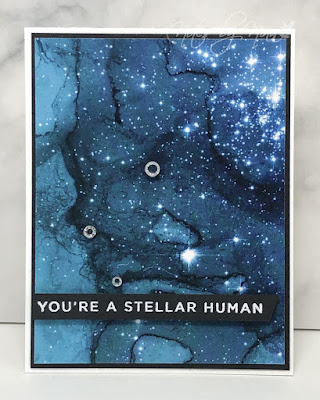 Thank you for stopping by,
Nina
Posted by Notes by Nina at 8:53 AM No comments:

Ohh poor blog, poor craft space too. I have not spent too much time as of late with my paper and inks. When I have had time to create I have been pretty lax about posting.

I put this card together a couple of weeks ago, it is such a simple design but I like the way it came together. I have had this paper pad in my stash for a long time. I have started to look through things that have been around for a bit and either use them or start to de-clutter a little. It is way too easy to get excited about new stuff but I have also seen a bunch of what is old is new type items making the rounds again.

This card is slightly smaller than an A2 size, it was created to fit a specific envelope I had on my desk. I used a piece of black cardstock for the panel base, then cut a piece of designer paper to fit it. I cut a thin piece out of the DP panel to separate the top and bottom panels. Both panels have foam tape in behind to give it some dimension. 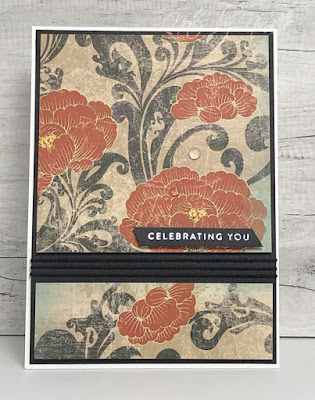 In the space left behind I wrapped some crochet thread around a few times. I heat embossed the sentiment in white on black cardstock then popped it up with foam tape. I finished with some clear dew drops.

Thank you for visiting,
Nina