I pulled out the glitter for today's card. I managed to keep the glitter spread down to a minimum too. I started by putting some double-sided tape on some cardstock then using that to adhere the glitter. I used some pink and purple to try to create an ombre effect.

I then used the glitter cardstock to die cut the balloons then added some twine to the back and set them aside to dry the glue before added some foam tape to the back. 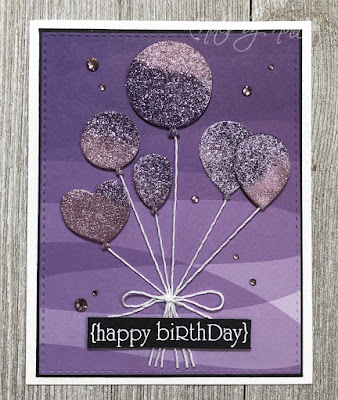 I die-cut a panel of cardstock then added a layer of black cardstock and then added the balloons. I heat embossed the sentiment then popped it up with foam tape. I finished the card with some gems.